HomeRecipes The Best Chicken Bone Broth You Have Ever Tasted

The Best Chicken Bone Broth You Have Ever Tasted 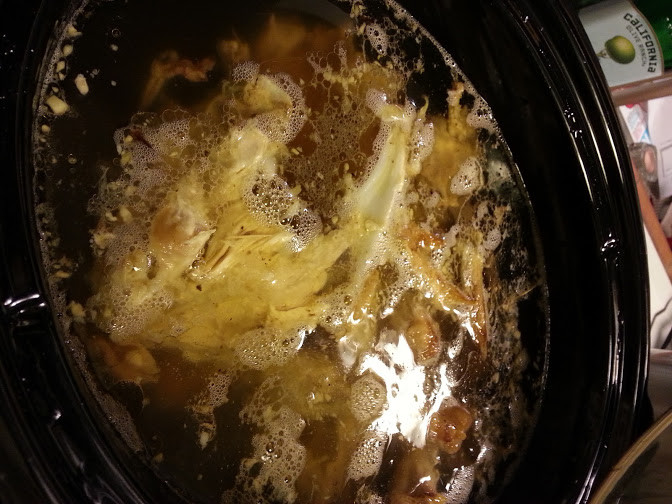 I know, I know – how can we be called PaleoBunker and not have already had a ton of bone broth? Well, you see our slow cooker was too high tech: we have one of those electronic pressure cooker, slow cooker, rice cooker combinations, and it only did 9.5 hours of slow cooking at a time. Bone broth needs at least 12 hours for chicken and 48 hours for beef. So we went out and bought a “dumb” slow cooker from Target for $30 which you can leave on for days. Here’s what we are currently cooking:

Put your slow cooker somewhere it wont be disturbed for a day or two. Put chicken in. Cover with water until just covered. Add vinegar, salt, garlic. Put the lid on, plug it in, turn it to low, and then leave it. Resist the urge to look at it. If using chicken bones, cook for no less that 12 hours, beef bones, no less than 48. Put a post it on it which says something like “Do not touch, move or open until” then write the date and time on it. When the time comes, use a slotted spoon to get the bones out and use the broth for anything: soup, stews, or just plain in a mug. Word of warning its a bit fatty so don’t drink too much on its own at one serving – recommend a small cup on its own.