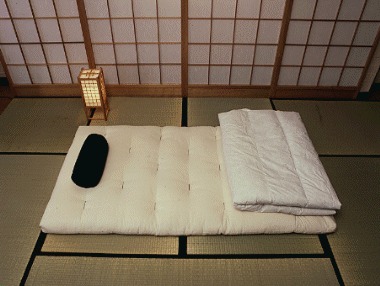 So in our quest to eat and sometimes live a bit more Paleo (no we probably won’t give up electronics like some other families have) we looked into different ways of sleeping.

Our bed was getting a bit long in the tooth so we thought, lets see if we can replace it with a more paleo type sleeping arrangement. So we looked around and did some research.

My stepson sometimes slept on the floor in his room, he mentioned that would keep him more awake and less groggy in the mornings. But we thought, thats one idea – but I doubt that paleolithic man actually slept on anything as artificial as a floor. More likely, paleo man probably slept on the ground, grass, fields etc – probably a pretty lumpy, hard surface, and probably a different hard lumpy surface every night.

Whats the nearest equivalent to a hard, ever changing lumpy surface in the modern world? A real, honest-to-goodness Japanese futon. So we started looking around and found a few Japanese stores in the area (one of the benefits of living in the SF Bay Area, there are two Japantowns of a decent size within driving distance) and found a store in SF Japantown which sold locally made futons with real organic cotton, and at a fraction of the price a mattress would be.

We were thinking of putting it right on the floor but we decided instead to buy a slat bed from Ikea, but a really low one so we could get as close to the floor as possible.

We got a 4 inch futon (I wanted a 2 inch but Kitty had other ideas – at least the 4 inch didn’t have any foam inside like some US made futons had) so it was as close to a paleo sleep that we could get.  Damn, those things are heavy!

We got it and the bed home, assembled it. We also bought a futon cover in order to protect it, then put our regular bedsheets on top.

The first nights sleep on it was awesome! A completely different experience from a mattress. I woke up feeling totally energized. It does require a bit more care than a regular mattress (we find that we have to flip it every time we change the sheets in order to maintain the “lumpiness” we think mimics a more paleo sleeping position) and apparently doesn’t last as long, but I have to say its worth it.

So if you want to live a more paleo lifestyle in addition to your eating habits, I highly recommend replacing your bed with a real, non-foam, organic cotton futon. As time passes and we use it more, we’ll keep you updated our our experiences.