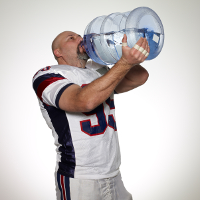 Based on more fallacious research: drink when you are thirsty: that is WHY we get thirsty. Pumping more water into your body won’t do more…

Americans this week are being blasted with a new public health campaign: drink more water. On the face of it, this sounds reasonable, but when you look a little closer, it’s so ridiculous it’s almost funny. First of all, none of the “health officials” involved can actually tell you how much is “enough” water and whether people are or aren’t drinking enough already. And then there’s the fact that it’s all sponsored by beverage companies, so representatives aren’t even allowed to say “drink water instead of Coke” which would actually be useful advice; they have to simply keep repeating “drink more water!” like a broken record.